This Essay is part of my MA Art and Design (Illustration) research on Illustrating music. It discusses the relations between musical aspects and artworks. By artwork I am referring to visual presentations such as drawings, illustrations or paintings. The thread of this paper is to explore territories of illustration and music in ways to deepen the understanding of how visual mark making corresponds to aspects of music. On the second part I take a look on Paul Klee’s composition Alter Klang (1925) which is a good example on how artists reflect musical structures in their work.

Paul Klee’s was one of the most remarkable; I would say a pioneer in his area of research of using musical structures and combining expressiveness in his paintings. His work Alter Klang (1925) is famous for its colour composition elements. The structure of the music is one of the main aspects of which Klee used as a base method for creating the colour composition as the Alter Klang is. Having mentioned that, Klee is not the only one who came up with the idea of exploring nonreferential picture space. In fact, Klee’s works from that period can be recognized to be part of the movement when artist such as Mondrian and Moholy-Nagy worked on rectangle compositions as well. (Kagan1983)

Regarding Kagan (1983: 67), Klee’s work shows how paintings have an absolute structure as in music and at the same time it doesn’t deny expression. After first sight one may notice that surface of the painting is a square, which consists of colored rectangles. It might be obvious how rhythm is shown in this composition; repeated rectangles create a grid, which gives the idea of rhythm. On the other level repeated color tones and hues lead the audience to explore paths of the painting, which also creates rhythm and relations between colours. Indeed, the main aspects in his paintings were concepts of colour harmony, value and chiaroscuro. He was influenced by structure of polyphonic music, which prevailed in music between the 14th and the 19th centuries. (Kagan 1983:69)

It is said that Klee translated music quite directly, using its structure as starting point. One might think that different colours represent different tones of music, and as well as the colour tones indicate the changing of musical harmony. It can be speculated what these methods meant for Klee. However, the interesting detail of the Alter Klang is that he wanted to use the idea of music structure and explore artwork from Leonardo Da Vinci. He translated painting to his own language, to colour block compositions, using the same colour values as in Leonardo’s work. It is notable that the edges of the Alter Klang are darker and colors become lighter towards the middle of the painting as it is in Leonardo’s work. Indeed, it can be seen that he explored the pictorial light and light that was ‘created by movement of colour’. That is he wanted to point out the expressiveness of old paintings but at the same time follow the strict structure of music. He called the method cool romanticism. (Kagan 1983)

Paul Klee has said; make visible rather that reproduce visible. (Thompson 2006:12). The way I understand this is he wanted to express the complex relationship between music and painting. Could it be that he suggests the purity of music can only be found from the structure? I find structure is something that reveals the composer’s intensions. Having said that I’m referring the fact that when you listen to a repertoire of music from the same composer you tend to recognize the typical melodies, harmony developments and rhythms. And finally, the way the composition is performed is an outcome of the communication between performer and structure. Regarding Kagan (1983:68), Klee disengaged the pictorial space from the physical world by creating non-figurative works. So in that sense, I can see Klee had a mission to bring together the expressiveness and structure using the dynamical colour variation on flat grid. When the painting is constructed of the non-figurative elements, structure unites the painting to the music world. In that sense, make visible might suggest to create abstract -non-figurative paintings. 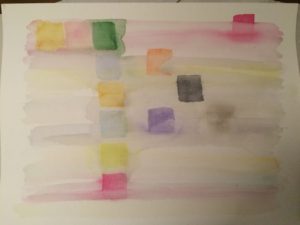 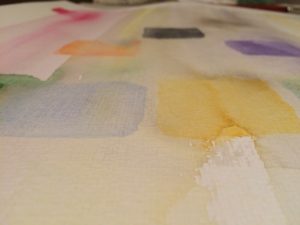 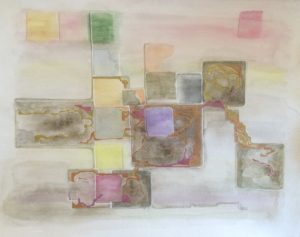 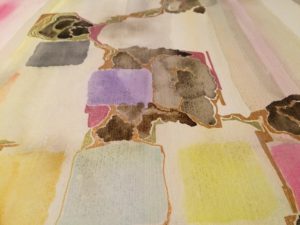 …and finalised work with a zoomed in picture. Media: Watercolor and pigment ink on 300g paper, 60×50 cm