“Color is the keyboard. The Eye is the hammer. The Soul is the piano with its many strings. The artist is the hand that purposefully sets the soul vibrating by means of this or that key”.

The sentence above was written by Kandinsky. It’s from Tim Ingold’s article (Ways of mind-walking: reading, writing, painting), which I mentioned in the former post. Concerning painting music Ingold mentions that Kandisky had characterised how music and painting music  “…open the mind to inner thruths…“. Ingold described how Kandinsky took inspiration from the composer Modest Mussorgsky’s piano composition Pictures at an Exhibition (1874). Kandisky used the same name for his own exhibition in 1928. In turn Mussorgsky had taken inspiration for the composition from his friend Viktor Hartmann, the Russian artist and architect. I think it’s fascinating how Hartmann’s works have transformed to music, and later to abstract art pieces.

To illustrate the transformation I searched for one of  `the exhibition´ works. The below image (picture 1) presents the painting called The Great Gate of Kiev, by Hartmann. Originally Hartmann’s work was for the competition, where he was commissioned to design the great gate in memory of the 4th of April in 1866, when Tsar Alexander II survived an assassination attempt, and escaped to Kiev  (Stmoroky 2000). However, the project was cancelled and Hartmann wasn’t recognised for this work in his lifetime. After he had passed away Mussorgsky composed the piano suite mentioned above, and he named the pieces after Hartmann’s works. (Ingold 2010) The last `picture’ of the exhibition suite was named after this event. Later Kandinsky painted his own version of the same theme (picture 2).

You can listen to Mussorgsky’s piano piece The Great Gate of Kiev here. 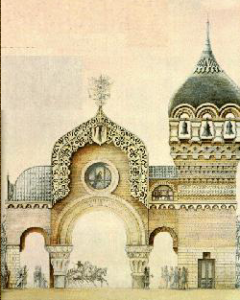 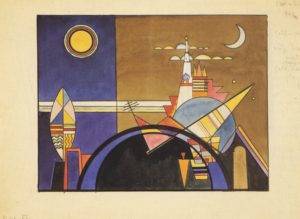